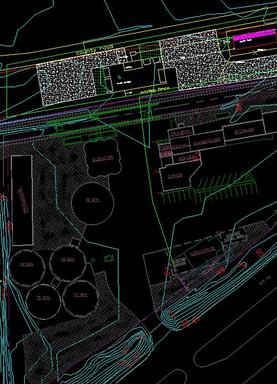 Schutte Excavating INC was first sparked in 1998, when upon returning from college to the family dairy farm my dad saw the need for better drainage on our flat, wet southeastern Indiana soils.  That lead to the purchase of a tile plow, the first of its kind in the area.  "You can figure that out" was the comment I remember from dad when the demo plow showed up.

That was all it took to push me into excavating.  I had soon purchased a rubber tired backhoe, and was quickly doing small jobs for neighboring farmers.  As time went on and the jobs got larger I added a small dozer.  It didn't take long to see the business potential and in 2003 I hired my first full time employee.

Starting out the first thing that I noticed about the type of work I was encountering was that nothing had "plans".  Doing general farm excavating and drainage work this was and still is common.  My problem was I found it difficult to give a good solid estimate without taking to the time to at least draw up crude plans.  The larger the jobs got the more complicated plans became.  By 2007 I decided there had to be a better way.  Most of my customers wouldn't pay an engineer and surveyor to design a project.

I made the leap and purchased a GPS "rover", along with Carlson Takeoff design software.  This gave me the capability to survey a site, recreate the surface in the computer at the office, and then design plans for any type of project.  From tile jobs to ponds to house sites this changed the way we were doing work.  Now we had the ability to plan, design and layout and make changes to an entire project right from the computer.  Creating designs and overlaying them on Google Earth images could insure owners that everything was where they wanted it.  This also allowed me to develop very accurate cost estimates ahead of time.  Budgets could be developed and maintained and projects could run smoothly.

Building on this over time I realized that many projects had become large enough to require professional engineering.  As we started into small commercial projects it became clear that the ability to navigate drainage ordinances and comply with Rule 5(construction stormwater discharge) regulations was becoming daunting for project owners.  That lead us to developing relationships with several engineering firms to insure that all projects met drainage standards laws and regulations.  We also started completing Rule 5 permitting in house to help lower cost and speed the process.  We now can handle all the aspects of a site development project from start to finish.  If you have a project in mind, but don't know where to start, please contact us and we can help you.